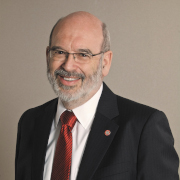 Professor Sir Peter Gluckman is the Founding Director of the Liggins Institute and one of New Zealand’s best known scientists. His research focuses on what gives us a healthy start to life: understanding how a baby’s environment between conception and birth determines its childhood development and life-long health - and the impact that this knowledge has for individuals and whole populations. His research has won him numerous awards and international recognition including Fellowship of the Commonwealth’s most prestigious scientific organisation, The Royal Society (London). He is the only New Zealander elected to the Institute of Medicine of the National Academies of Science (USA) and the Academy of Medical Sciences of Great Britain. In 1997 he was made a Companion of the NZ Order of Merit for services to medicine and in 2001 received New Zealand’s top science award, the Rutherford Medal. A University of Auckland Distinguished Professor, he is Professor of Paediatric and Perinatal Biology and Director of the National Research Centre for Growth and Development. He was formerly Head of the Department of Paediatrics and Dean of the Faculty of Medical and Health Sciences for nine years. He has been extensively involved in many aspects of science, health and educational policy development. Professor Gluckman is an international advocate for science, promoting the translation of discoveries in biomedical research into improvements in long term health outcomes. His work with organisations such as the WHO has brought growing recognition of the importance of a healthy start to life. He is the author of over 500 scientific papers and reviews and editor of eight books, including two influential textbooks in his subject area. He is passionate about communicating a better understanding of science in the community and, with colleague Mark Hanson of The University of Southampton, has coauthored two books for non-scientific audiences: The Fetal Matrix (2004) which summarises his ideas on how events in early life lead to altered disease risk in later life and Mismatch - Why Our World No Longer Fits Our Bodies (2006).

Sir Peter has received the highest scientific and civilian honours in New Zealand and numerous international scientific awards.  In 2016 he received the AAAS award in Science Diplomacy.  He is a Fellow of the Royal Society of London and the Royal Society of New Zealand, a member of the National Academy of Medicine (USA) and a fellow of the Academy of Medical Sciences (UK).