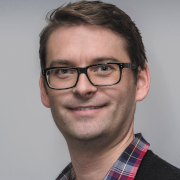 Dr Ben Albert grew up in Tokoroa, a small town in New Zealand, and studied medicine at the University of Auckland. After graduating he worked in hospitals in Rotorua and Whangarei before returning to Auckland where he completed training in paediatric endocrinology at Starship Children’s Health. Working with children and young people, he was struck not only by how common obesity has become, but that many obese children are now developing diseases like type 2 diabetes that were previously seen only in adulthood. During his PhD research at the Liggins Institute he studied the metabolic effects of the omega-3 fatty acids found in fish and krill oils. His work showed that there was a problem with the quality of fish oils sold in shops, with many products being oxidised “off ” at the time they are purchased. He also showed that in rat pregnancy fish oils that had oxidised (“gone off ”) were harmful, but that when mothers took fresh fish oil in pregnancy there were long term benefits to the offspring, that could reduce their risk of obesity-related diseases. His future work will be to find out whether fresh fish oil could have similar benefits for the children of women who are overweight.